All the web browsers like Google Chrome, Opera, and Mozilla Firefox make use of web caching technologies in order to save documents such as HTML files and the images on the web sites visited by the user. The cache files enable the reduction of bandwidth usage and load on the server. In addition to this, the time for loading the webpage is decreased when the user visits the same webpage again.

This write-up primarily focuses on the Mozilla Firefox cache folder. We will describe the location of the cache files and what function they perform.

In order to access and view Firefox cache files the users can make use of a hidden URI named as about:cache. When this URI is entered into the address field of Firefox, it gives the information regarding the Cache service. It also displays information like links to various webpages and the number of entries made in the memory. In addition to this, it also stores information regarding the entries made in the appcache and the disk and the total space occupied by them.

The default location of folder varies based on Windows OS currently in use. 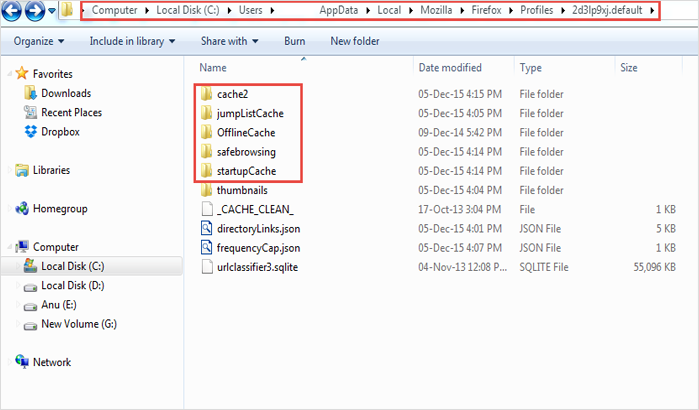 There are multiple Mozilla Firefox cache folder stored at this location. Some of them are:

Cache2 is the new storage format for Mozilla Firefox, starting from in version 27.

A jumpList is a list of tasks and the files that have recently been opened. The list of websites that have been visited frequently is also displayed in jumplist. OfflineCache

The Startup Cache file stores excess and temporary data on a user’s computer that may occupy valuable space. A user’s private data such as passwords and browsing history belonging to registry or file system also gets stored in the startupCache.

The OfflineCache is used to view web pages in offline mode. This file should not be confused with the memory and disk cache.

In addition to the Mozilla Firefox cache folder & files, SQLite also plays an important role in storing Mozilla Firefox data. For different functions such as cookies, searches, places visited, etc. Mozilla makes use of this files. For more information, on SQLite database files of Mozilla Forensics, click on the below link: http://www.acquireforensics.com/services/tech/mozilla-firefox.html